Jun 02, 2018 by Maria Ritter
Yes, there are good rats, and there are really bad rats! You all know this fact.

As you see below, Wilhelm is learning about this in the famous Cathedral of Cologne in Germany, where the church mice, Teresa and Petrus, give him and his friends a tour of the crypt and show them the famous altar painting by Stephan Lochner, The Adoration of the Magi (1445). Much is to be learned from art!

“Praise God and all the saints above, especially Saint Francis! Before you go, though, we’ll give you all a tour of the crypt and the cathedral,” Petrus chimed in. “It’s very simple, just follow me down the hallway. To the left, some famous rats have been buried here, like Saint Theobaldus the Strong, in 1525. He saved the city from invaders by scaring them at night and biting off their ears.

And then there is Santa Hildegarda, a faithful rat who helped strangers in distress and fed the hungry in 1629 by collecting food from trash on the streets.

Way in the back, over there, is the grave of a bad guy, Hannibaldus, the Terrible. He was a tyrant rat, and you don’t want to hear about his terrible reign. Many rats still come here and offer their candles and food to ask him to repent for all the evil he had done to others.

No, Hannibaldus will never repent. He was a bad rat.” Petrus sighed and folded his hands.

Look below. Can you find the rat Samuel under Mary’s coat? 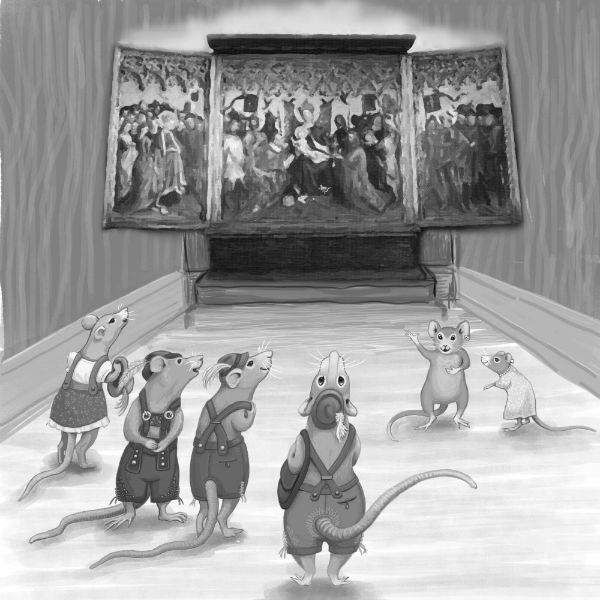