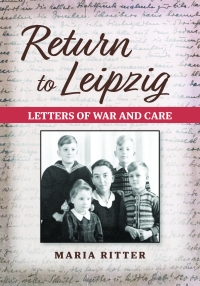 Letters of War and Care
Buy from:

“The following collection of letters tells a story of human compassion, of survival, and the power of an insistent faith. Gratitude is timeless and the Artabans are still among us on their journey.”
— Maria Ritter, 2020

After the collapse of Germany in 1945, neither unending grief nor mountains of shame could ever suffice as a silent atonement. Maybe as survivors, we deserved the hunger and the suffering. I accepted this fact as a fitting punishment. More so, we all were hungry and cold during the winter. They called it die Hungersnot, the famine.

And then, a miracle happened. Starting in 1947, a group of Sunday School members, by the name of Artaban, of a Methodist church in the Los Angeles, California area began to send us CARE packages. How could they move through their own hate toward Germany and the Nazi destruction worldwide and look at us as suffering children in need? What changed their hearts to reach out while they still buried their sons and daughters?

The packages contained food and clothes to keep us alive and warm, basic items such flour, sugar, and milk powder as well as yarn, soap and even toys. Faithfully, Mother, in turn, wrote back many thank you letters, some in half English half German. Someone in that Sunday School class took the time to translate some of mother’s letters into readable English and saved all her letters in a folder.

These letters tell a story of human compassion, of survival and the power of faith. Gratitude is timeless and the Artabans are still among us.

Return to Leipzig follows the author’s first memoir, Return to Dresden (2004), with another reflection on her childhood in Germany during and after World War II. She has extensively written on trauma and recovery and has used memories, storytelling, and poetry to invite her readers into a world of peace.